Is Microsoft still making new version for WPF and Silverlight

IT world is changing fast. There are always new tech everyday. Especially after HTML5 came, looks like lots of existing tech have been affected what ever how they were great. such as Flash, Silverlight…

So the question is whether Microsoft is still working on the new versions of WPF and Silverlight ?

We have watched related information from Microsoft long time, recently we finally see something: Looks like Microsoft is still working on WPF at least, also WCF, look here:

From Microsoft’s newest .NET framework 4.5, we can see WCF 4.5 is just in the features list: 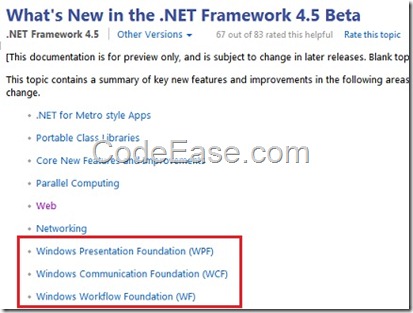 So we know Microsoft should be still working on WPF actually.

And, we can confirm this from some famous and popular Microsoft experts’ blog such as Pete Brown (A FontFamily ComboBox in WPF 4.5), Scott Hanselman (Visual Studio 11 Beta in Context).

But how about Silverlight ? The final version is Silverlight 5, Will there is new version for Silverlight? We do not have any new message about it.

But, let’s see some information which we got from Mr. Pete Brown’s comment:

Nothing's "disappearing". WPF 4.5 is in the latest .NET framework, which isn't even released yet. Silverlight 5 was released in December with a 10 year support policy.

Visual Studio 11 includes templates for Silverlight and WPF applications for the desktop.

So, for us, we still need more information to decide our new software development solutions.

But what do you think ?